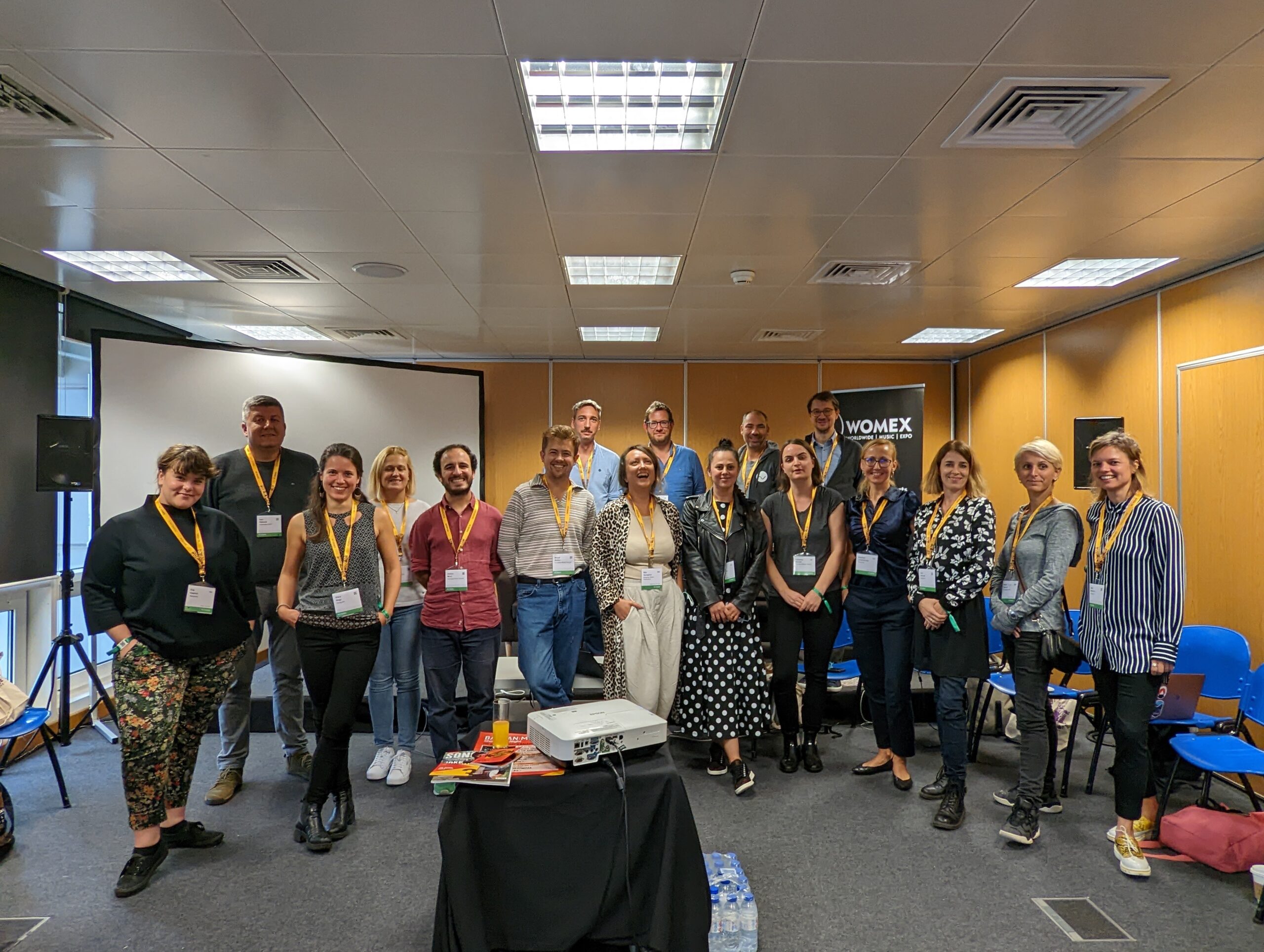 Through the „MOST“ project, the EXIT Foundation has taken part in the 28th edition of the prestigious Worldwide Music Expo 2022 (WOMEX), which took place from 19th to 23rd October in the Portuguese capital of Lisbon.

This year, the EXIT Foundation and the „MOST“ project, supported by the Creative Europe programme, were presented through several activities aimed at spreading Balkan music culture to world music enthusiasts and delegates at the WOMEX conference.

One of these activities was the conference panel “The Brand of the Land“, dedicated to the branding of Balkan music, featuring the Programming Director of the Hungarian Hangvető, Balázs Weyer, the founder of the Finnish agency Minnamurra Music Management, Minna Huuskonen, Tino Grasselt representing the German music agency Tomato Production and Marija Vitas representing the World Music Association of Serbia.

The exclusive showcase of the “MOST” project on the offWOMEX stage, entitled BALKAN:MOST Night, featured three rising regional world music bands — Macedonian Perija, Bulgarian Oratnitza and Romanian Corina Sîrghi și Taraful Jean Americanu. Perija and Oratnitza were selected by WOMEX earlier this year at the new World Music Balkans (WOMBA) platform. They were presented at the eponymous conference at Fruške Terme and a showcase on Exit’s Pachamama stage.

WOMEX – Worldwide Music Expo is one of the largest music conferences in the world, including a fair, panels, films, and concerts. This year’s culturally and musically diverse event concluded with more than 3,100 music professionals (including 280 performing artists) from 113 countries, hosted more than 60 showcase artists representing 280 musicians spread across seven stages, 21 music-based documentaries, 111 speakers and mentors participated in the conference sessions, and a bustling trade fair with 676 exhibiting companies with more than 260 stands and two radio studios on-site.

This project has been funded with support from the European Commission. This web site reflects the views only of the authors, and the Commission cannot be held responsible for any use which may be made of the information contained therein.

Hello! We use cookies in order to improve your experience

WOMBA uses cookies so that we can provide you with the best possible user experience. Cookie information is stored in your browser and performs functions such as recognizing when you return to our website and helping our team understand which parts of the website are most interesting and useful to you.

Strictly Necessary Cookies should be enabled at all times so that we can save your preferences for cookie settings.

If you disable this cookie, we will not be able to save your preferences. This means that every time you visit this website you will need to enable or disable cookies again.

We use Google Analytics to collect anonymous information such as the number of visitors to the site, and the most popular pages.

We use Google Ads in order to advertise and promote our products and services when users search for the relevant keywords.

We use Facebook Pixel in order to gain an insight into users that also use Facebook. This allows us to better reach our target audience, improve sales, and analyze campaign results.

Please enable Strictly Necessary Cookies first so that we can save your preferences!